Baby Daisy is the baby form of Daisy, who first made an appearance in Mario Kart Wii as an unlockable character. She reappears in Mario Kart 8 and Mario Kart 8 Deluxe, this time playable from the start.

Baby Daisy, even though she is just a kid, has the same vivacious attitude as her mature counterpart, Princess Daisy. She is outfitted in Daisy's traditional colors, yellow and orange. However, her dress is noticeably shorter, like Baby Peach, her baby friend. Her dress ends in two layers of orange trim, and she wears a yellow diaper over her bottom. On her footsies, she has brown baby shoes and she wears white socks beneath them. She has the same red hair as Daisy, although Baby Daisy's hair is shorter. Her eyes are blue, and she has the same golden, jeweled crown and daisy style necklace as Princess Daisy. She also has a golden pacifier. Baby Daisy is given a speed bonus of +5, a weight bonus of +6, and a mini-turbo bonus of +3 in Mario Kart Wii, making her the most useful lightweight racer in that game. 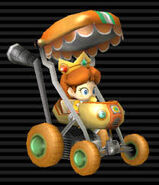 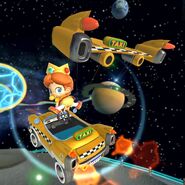 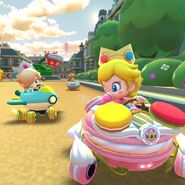 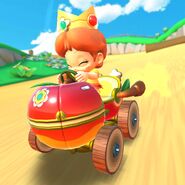 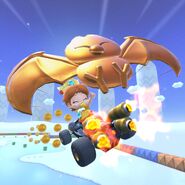