This item will cause any karts that come in contact with it to spin out.

The Banana (also known as the Banana Peel) is arguably the most common item in the Mario Kart series. These slippery items cause a vehicle to spin out. While easily dismissed as being the least powerful item in Mario Kart, the Banana Peel is not to be underestimated completely, as it is also the most versatile item in the right hands. If placed well, a single Banana can cause an unfortunate racer to fall straight off the track, and if thrown ahead from just the right distance, and at just the right angle, they can make for an unexpected, and almost unavoidable attack. Even just one Banana can decide whether you're in 1st place or 2nd or even 3rd place!

A Banana can be used as an offensive or defensive Item. A player can throw a Banana out in front of their kart to try to trip up the racer in front of them. They can also be deployed behind the kart, so the driver behind you will be greeted by a deadly smiling Banana and spin out.

For defense, a Banana can also be deployed and suspended behind the kart (This feature is not present in Super Mario Kart). The Banana now acts as a shield against other Items such as a Red Shell or a Green Shell. Also, they can act as a barrier against opponents who try to knock you off the edge. In Mario Kart 8, Triple Bananas circle around the racer, so they can be used by running into an enemy racer, making them spin out.

There is also a larger variant exclusive to Mario Kart: Double Dash!! called the Giant Banana. When a driver hits a Giant Banana, the fruit will split into three normal Bananas. This gigantic special item can only be used by Donkey Kong, Diddy Kong, King Boo and Petey Piranha, who are able to use any special item. This item makes another appearance as a character exclusive item in Mario Kart Tour.

The Banana Bunch is an item exclusive to Mario Kart 64. It is a row of five Bananas that trail the user's kart. Hitting another racer with the trail causes all the Bananas to drop. This is one of the few normal items that have only appeared in one incarnation; a Triple Banana variant took its place in Mario Kart DS and onward, with the only exception being Mario Kart: Double Dash!!

A banana from Super Mario Kart. 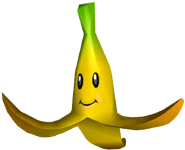 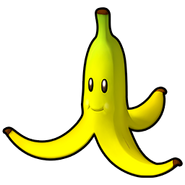 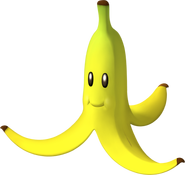 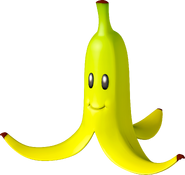