Five bananas will trial behind your Kart. You can place one banana at a time where you want.

The Banana Bunch, also known as the Quintuple Banana, is an item exclusive to Mario Kart 64. Instead of just ONE Banana, a whole line of five fruits can be put to use around the course. The Triple Banana variant took its place in Mario Kart DS and onward, most likely because this Item was a bit too powerful...

Once a pack of these Bananas is picked up from an Item Box, the player can start dropping Bananas everywhere. It's best to make barricades around one area (put down one or two in a spot each time you make a lap) or around tight corners. Another strategic place would be right by boost pads or long jumps (ESPECIALLY in Wario Stadium's infamous long jump). They also trip up tailgaters but note that if someone runs into your bunch, the whole line will break apart (with a crazy sound for effect). Apart from this, you can try throwing them at racers in front of you, but this can be difficult to master.

Probably the best strategy with a Banana Bunch is to leave it hanging from the back of your Kart. Unlike singular Shells or Bananas, you don't even have to hold down the Item button; pressing it once will activate it. Red Shells or insanely well-shot Green Shells will be neutralized... at least five times! And it's also safe to drop 2 or 3 Bananas because usually a shield of only 2 or 3 is needed (especially if you have an Item at the ready in your Item slot).

Luckily, in Mario Kart 64 (also in Mario Kart: Super Circuit), there's a skill that can be used to nullify the effects of a Banana... if you plow straight into one, your vehicle will start to shake. At this point, hit the B (brake) button. A musical note will appear over your player's head, signaling that you were saved from slipping! (However, this only works when going straight into one. If hit one from an angle, prepare to spin out.) To avoid this situation altogether, remember not to closely follow someone armed with a Banana Bunch, and just remain vigilant in general.

A custom image of a Banana Bunch with Mario Kart Wii-era Bananas.

The in-game icon of the Banana Bunch (notice there' only 4 Bananas.).

Princess Peach, well protected on Luigi Raceway, with her rack... her Banana rack...

A custom image of a Banana Bunch with Mario Kart 7-era Bananas. 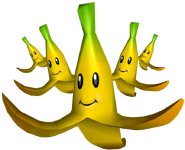 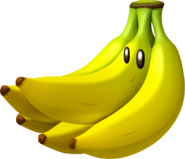