Battle Course 1 is a simple, square-shaped stage with a tarmac surface and dirt square in the middle. It resembles a miniature version of Battle Course 4 from Super Mario Kart, featuring three walls forming concentric squares, all having a small gap on each side to allow racers to drive.

Battle Course 1 reappears in Mario Kart 7 as a retro battle stage. The only major change is that there is a wooden ramp added in the middle of the dirt square so players can perform aerial tricks. 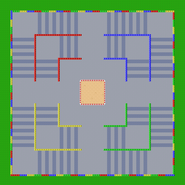 The stage in Mario Kart 7.

A shot of the whole stage in Mario Kart 7.
Add a photo to this gallery
Retrieved from "https://mariokart.fandom.com/wiki/Battle_Course_1_(GBA)?oldid=74435"
Community content is available under CC-BY-SA unless otherwise noted.