It has some walls and a wide open sand-filled circle in the middle, which can create easy opportunities for open attacking. Shells are optimal for attacking on this stage, as it hits people often due to its large open space.

The background in the course comes from the game's Peach Circuit.

This stage reappears in Mario Kart Wii with minimal changes. This stage also has a tournament where the player must pass though a few gates. 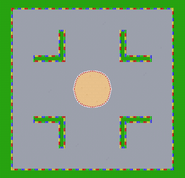 The stage in Mario Kart Wii.

Mario competing in a tournament.
Deutsch
Community content is available under CC-BY-SA unless otherwise noted.
Advertisement