Battle Course 4 is a battle stage from Super Mario Kart. It reappears in Mario Kart Wii as a retro stage. Battle Course 1 from Mario Kart: Super Circuit is a miniature version of this.

The track is similar to Battle Course 1, but is much bigger. It is also a perfect square. The stage has Item Boxes on the outer rings, but it doesn't have any on the innermost square.

This stage reappears in Mario Kart Wii as the first retro battle stage in the game. It is not recommended to use Mushrooms or Stars on this course since it is hard to chase an opponent (except if they have been hit by a Thunderbolt). The optimal items are Red Shells and Green Shells. 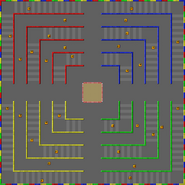 The stage, as it appears in Super Mario Kart.

Luigi competing in a tournament.
Add a photo to this gallery

Retrieved from "https://mariokart.fandom.com/wiki/Battle_Course_4_(SNES)?oldid=74368"
Community content is available under CC-BY-SA unless otherwise noted.