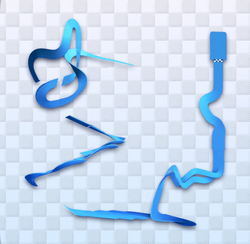 Big Blue is the final track of the Bell Cup in Mario Kart 8. It based on the F-Zero series, like Mute City.

Like Mount Wario and N64 Rainbow Road, this course is not a three-lap course, but instead, one long lap divided into three sections, making it the first and only DLC course for this to be the case.

And, just like Mute City, this stage has no physical coins, but rather, Recharge Pads on the sides.

The staff ghost kart setup for this track is Mario riding the P-Wing, with Blue Standard tires and the Super Glider.

The track starts out with anti-gravity. Similar to Mute City, the racers have to drive over the refuel pads in order to get coins. After a turn near the start, the road forks, with one track going up, and the other going down, both ending in a jump. After this, the players will go into a tunnel, with speed panels that go either backward or forwards, depending on the track, similar to the ones in Toad's Factory.

Racers will then enter a section of speed panels, with more speed panels on them. The road then forks out again, one going left, and the other right. The right features speed panels sooner, while the left features them a little after they do on the right. After a few turns, the player reaches the end of the track.