The stage is made completely out of wooden planks in the shape of a circle, and they slope a little to the center. This gives the Course a donut shape in appearance, in accordance with its name. In the epicenter of the course, a giant pit of lava awaits those who venture to close to the middle (donut hole). If a player falls into it, they will lose a balloon and will have to be returned by a Lakitu. There are four block towers located around the course that provide a means of evasion from opposing racers and their items.

This battle stage reappears in Mario Kart 7, but the stage is mostly unchanged, apart from the improved graphics and the addition of glider pads, and air-spawning Koopa Clown Cars. 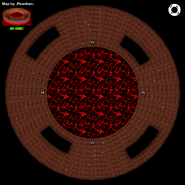 An overhead map of the stage.

The course in Mario Kart 7.

The stage's icon in Mario Kart 64.
Deutsch
Community content is available under CC-BY-SA unless otherwise noted.