Block Fort is one of four battle stages in Mario Kart 64. The stage has four large fortresses, which are red, blue, yellow, and green and are connected by bridges; one on the bottom of the stage and one on the top. The bridges appear to be metal and are gray. The bridge at the top is generally slightly longer than the one at the second level. The floor is blue. In this stage, there are a large number of Item Boxes, especially between the blocks at the lowest level. Green Shells are a nuisance, as they just bounce off of the walls. Red Shells are next to useless since they'll home into a higher enemy and crash, which is not necessarily what is wanted. The music is shared with Choco Mountain and Double Deck.

Block Fort is a battle stage for Balloon Battle and Shine Runners. It is the largest stage in the game, and battling computer-controlled opponents at a normal difficulty would probably take about six minutes or more. The top level is usually the safest, however, it is easier to strike down foes on the middle level. Several techniques are possible against opponents, such as leaving Banana Peels and Fake Item Boxes on the bridges. However, those that can drive to the side of the bridge, dodging the traps. Mission 6-4 takes place here, where Mario has to destroy 10 moving Item Boxes. Although Choco Mountain returned as well, it receives the regular DS battle theme.

The course, as it appears in Mario Kart 64.

The course, as it appears in Mario Kart DS. 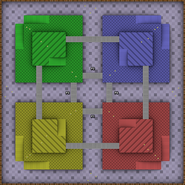 An overhead map of the course.