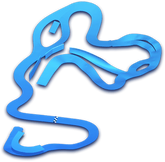 Bone-Dry Dunes (written in PAL regions as Bone Dry Dunes) is the second track of the Special Cup in Mario Kart 8. This course takes place on a desert and canyon place with shifting sand rivers and bones.

The staff ghost kart setup is Morton driving the Tri-Speeder with Monster tires and the Super Glider.

The course starts in an area with a small audience and tents. The road turns right before a sinuous section and briefly splits into two paths (a ramp is placed between them). After a winding path, racers will find a wooden bridge which leads to a canyon filled with giant bones.

The road now is sandy and begins with a right turn. Races now encounter a Bone Piranha Plant. The following area has two distinct road options: the one to the left stays on the ground, and features two more Bone Piranha Plants; the one to the right is an anti-gravity section where characters race along a wall made up of ribs, featuring some boosters. Both end with a gliding pad that sends them to a cave, whose entrance is a giant skull and hands resembling Dry Bowser.

There is a higher and a lower path to choose. The higher path is a narrow and rather short wooden catwalk. The lower one is the soil of the cave. Inside it, some Dry Bones wander around on the road, sometimes opening then closing their mouths. A left turn marks the exit of the cave right before the finish line.

At the beginning of the course, one can go straight instead of left or right to trick off a ramp using a Mushroom.

Peach, driving on the track.

Rosalina races on the anti-gravity portion of the track.

A Dry Bones, walking on the track.