One of the most infamous bosses in video game history, Bowser is the king of the Koopa Troop and the main antagonist in the Super Mario series and takes Princess Peach captive from Mushroom Kingdom time after time. His plans are always thwarted, however, as Mario traverses through many hazardous worlds to save her and defeat Bowser in his final castle. Bowser as a protagonist only appeared in Mario & Luigi: Bowser's Inside Story.

So it's kinda funny how Bowser and Mario, two big enemies, can come together to compete in a not-so-friendly rivalry of Mario Kart. Throughout the series, Bowser has always been in the heavyweight class, holding one of the fastest top speeds out of all the characters.

Bowser is an incredibly strong Koopa and is twice the size of Koopa Troopa. His body is a dark yellow, and his bulky arms and legs end in razor sharp spikes. That's why no one wants to shake his hand. His tail is also spiky, and on his neck, shoulders and wrists are four black bands with silver spikes lining them. His mouth is full of sharp teeth, and large horns come out of his green head. He has a fiery orange mane, and on his back is a giant green shell with numerous spikes lining it. Bowser loves spikes. Bowser has a deep, growling voice, and he can shoot fire balls from his mouth. So watch out when he is talking. Bowser is the King of the Koopas.

Bowser is a heavyweight racer in the game, like Donkey Kong Jr. During races, Mario will be Bowser's rival. Bowser'e assigned course in the game is Bowser Castle 1, 2 and 3. As a computer-controlled racer, Bowser's special item is Fireballs, which cannot be used by human players.

Bowser is once again a heavyweight racer in the game alongside Donkey Kong and Wario. He gets his own personal course, Bowser's Castle.

Bowser remains as a heavyweight racer in this game. His own castle makes an appearance as a course once more, in four alternate iterations. During races, Donkey Kong will be his rival.

Bowser's team partner in the game in his son, Bowser Jr. The former gets his own personal kart, the Koopa King. His own castle is once again a course in the Special Cup. His and Bowser Jr.'s special item is the Bowser Shell.

Bowser's three personal karts of choice are the Tyrant, Standard BW and Hurricane, which is modelled after his Koopa Clown Car. He and R.O.B. are the heaviest racers in the game. Bowser Castle makes another appearance in the Special Cup. Bowser Castle 2 from Super Circuit appears in the Banana Cup. Airship Fortress also appears to be another course themes for Bowser. In fact, Bowser is the staff ghost for all of these courses.

Bowser is a large-sized racer in the game. Bowser's Castle once again appears in the Special Cup. Bowser Castle 3 from Super Circuit, and Bowser's Castle from 64 appear as retro courses.

Bowser is a large-sized heavyweight racer. Another re-iteration of Bowser's Castle appears in the Special Cup. Bowser Castle 1 from Super Circuit is a retro course in the Shell Cup. In the Star Cup, Bowser gets a neon-lit city of his own, titled Neo Bowser City.

During races, Bowser's rivals will be Mario and Rosalina, with Luigi as his third rival if Rosalina has not been unlocked yet. Bowser's Koopa Clown Car makes an appearance as an unlockable kart, simply titled the Koopa Clown.

Like all other installments, Bowser is classified as a heavyweight racer. Another re-iteration of Bowser's Castle appears in the Special Cup. Neo Bowser City also makes a return from Mario Kart 7, appearing in the Bell Cup. The Landship, a vehicle part in the game, is inspired by one of the many airships used by Bowser ad his army.

In Mario Kart 8 Deluxe, his Koopa Clown from 7 returns in the game. During races, Bowser's rivals are Mario and Luigi in both installments. 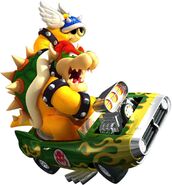 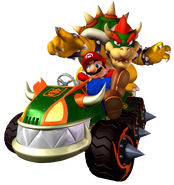 On the Mario Kart 8 title screen. 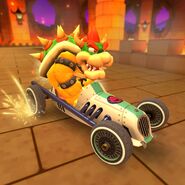 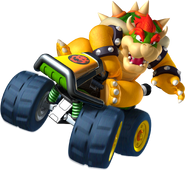 Bowser in his standard kart in Mario Kart 7.