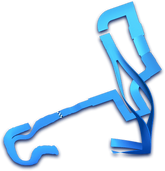 The staff ghost kart setup is Bowser driving the Badwagon with Standard tires and the Super Glider.

The course starts in the entrance of a castle. As soon as the drivers enter the castle, they will see the miniature of Bowser pointing the right way, along with several Gray Bowser Statues that shoot lasers on the drivers. After numerous turns, drivers will enter the road with anti-gravity sections. Along the way lies the ramps that the drivers can perform Tricks, but with the extreme caution, as there lies the sets of Firebars and a flail.

After these sections lies a U-turn that leads to the forked way where a flaming Bowser Monument is. The two roads will eventually merge into one and they will have spiraling section of the road. Lava pillars gush out from the lava pit and will hit the unwary drivers that pass through these hazards.

At the end of the road lies the gliding pad that leads outside of the castle. There is another U-turn, where incoming boulders launched from one of the castle's cannons will attempt to knock over any racers. After these turns lies the finish line.

The gliding segment before the course's end. 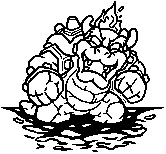