Bowser Castle is the third track of the Special Cup in Mario Kart DS as it's a more difficult track to conquer. The obstacles in this castle are more mechanized than previous incarnations. Sure, Thwomps still pound through the hallways, but there's a lot of moving metallic platforms and bridges trying to throw you off course (literally) and into lava. This track has not appeared in a recent Mario Kart game.

Like usual, the starting line is just outside the gates of Bowser's Castle. The track is merely a metal platform, and the only barrier on the edges is yellow precautionary tape (because of lava). The castle's entrance is fashioned into a stone Bowser head, with the mouth as the doorway. Razor sharp spikes line the roof of the brick fort. So, heading into the map, players pass a pair of metal claws on the side as the track rises to meet the maw of Bowser. Once inside and on the royalty grade-red carpet, you can hear the haunting laugh of Bowser (signaling impending doom).

The first room is decently wide, with columns supporting the roof on either side and Item Boxes laying on the flooring. Two Thwomps move back an forth parallel to each other, trying to smash kart racers. Arrows point out a sharp right turn into a thin, open-roofed corridor. Another right corner leads players to a flight of metal stairs. The borders aren't exactly safe either, as they are just a row of spikes. The second floor is reached at a right turn, and a platform leads drivers to a very closed-in bridge, right above the first room. Coming back into the castle, a circular metallic platform spins clockwise (counterclockwise in 150cc Mirror) underneath a low hanging roof. Although the rotating disk can automatically transport players to the waiting room, you have to be sure and not overshot the entry point- otherwise, you'll circle into an area in which Burners randomly spurt pillars of fire upon players. Leaving this room, another hallway, with a Thwomp posted inside, comes up. A 90-degree turn, followed super quickly by a left corner, heads racers into the next peril- a huge pit of glowing lava. To get around the hazard safely, a metal overhang rounds the edge a full 270 degrees, slowly going up and up. It even supplies a few Item Boxes to ease the suspense.

A long drop into one of Bowser's courtyards lies ahead. Across to the other side, racers can view a metal plank set up to continue the race, but first, a bridge must be crossed. This particular bridge wasn't meant to be crossed, as it's constructed of metal pieces fitted together to make a slippery cylinder slope. Plus, readjustment is always needed, as it rotates, switching from left to right (and when traversing it while changing direction, the sudden switch can have players fall in anguish below). You can only go at about a 30-degree angle until gravity prevails. Luckily, this isn't one of Bowser's usual gardens of lava; this one has plants. Just grass and metal sidewalks, but still. So, falling won't have you being saved by Lakitu, but it can still be time-consuming. The grass of course is Off-Road, so landing directly in it will be time-consuming. There are four plots of dark green grass, and sidewalks must be taken to get around them, up onto a wire mesh gangway that turns left, meeting up with the non-losers' path.

If you manage to keep your balance the whole way through, the pipe bridge drops off onto the wire platform and rewards the players with Items (the longer route also has Item Boxes at the mesh catwalk, too.) A sharp left shows players down the platform to a waiting Boost Pad, which launches players forward over a channel of lava and onto a large metal plank floating in the sea of fiery liquid. But like other metal objects in this course, this, and the three following platforms up ahead, move from left to right. This takes away the luxury of simply driving straight, with constant readjustment needed to pass safely. Also, there are no walls - just a black and yellow border.

One more section of mesh platforms suspended over the lava by long columns lies ahead. Barriers are almost nonexistent here, so in return, skills must flourish. They seem to be rectangular planks welded together randomly- the first wide platform quickly narrows down, with several Item Boxes lying on a pad of sheet metal. A right 90-degree turn comes next (the front graciously provides a few walls), and the planks start to rise steadily. A few small portions of walls dot the edges, and at another cross section of dense metal, a right turn comes up. A left and a right 90 follow, but they're so close together you can go straight. Crossing the last wire mesh gap leads to the finish line, finally. 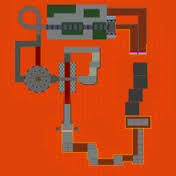 An overview of Bowser Castle.
Add a photo to this gallery
Retrieved from "https://mariokart.fandom.com/wiki/Bowser_Castle_(DS)?oldid=77232"
Community content is available under CC-BY-SA unless otherwise noted.