Bowser Jr. is Bowser's only son and is the secondary antagonist of the Super Mario franchise. He claimed that his mom is Peach, sometimes even calling her "Mama Peach" in Super Mario Sunshine. He first appeared in Super Mario Sunshine for the Nintendo Gamecube. Just like Bowser, he has captured Princess Peach multiple times. Bowser Jr. has been featured in recent Mario Party, Mario Kart, and Super Mario games, usually assisting his father in doing evil things. In Mario Kart: Double Dash!!, his Special Item is the Bowser Shell. Bowser Jr. is considered to be one of the best racers of all time. The Koopalings were originally meant to be Bowser's children, but this was changed when Bowser Jr. was introduced to the Mario series.

Bowser Jr. is an unlockable character in Mario Kart Wii. To unlock him as a playable character in the game, the player needs to get at least a One-Star Rank on all 100cc Retro Cups or by playing 3,450 races. Bowser Jr. is worked best with the Super Blooper or the Zip Zip. He increases Speed by +3, Handling by +2, Off-Road by +1, and Mini-Turbo by +1.

Bowser Jr. looks basically like a child version of his father, Bowser. For one, he is a lot shorter, because he is a little kid. Also, his chains lack the spikes that Bowser's do. He has his hair in a type of ponytail, the main difference is that he wears a handkerchief with a drawing of a mouth with sharp teeth on it, in which to make himself look evil. And instead of a full set of long fangs like Bowser, he gets a small tooth. That may be the reason why he wears that handkerchief. On his hands and his feet he has sharp white claws, he has four fingers on each hand and three toes on each foot, he also has white pads on the plant of his feet.

Bowser Jr. in his Classic Dragster.

Bowser Jr. in his Sugarscoot. 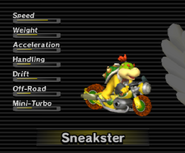 Bowser Jr. on his Sneakster.

Bowser Jr. on his Zip Zip. 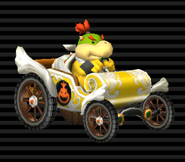 Bowser Jr. on his Daytripper. 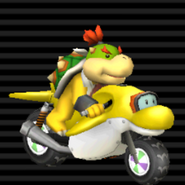 Bowser Jr. on his Dolphin Dasher. 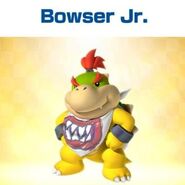