Briefly transforms the user into a Bullet Bill that soar through the air along the track, knocking over Karts along the way.

A Bullet Bill is an enemy and an item in the Mario Kart series.

The Bullet Bill is a recovery item in the Mario Kart series. When a player uses it, they are transformed into an extremely fast Bullet Bill, racing through the track with incredible speed, as well as automatically steering the player. The player can however slightly swerve in either direction to hit players (see below paragraph). The Bullet Bill's duration is lengthier the farther back a player is, in terms of places.

If a player is in the way, the racer who is using the Bullet Bill will knock them over, which causes them a great deficit in their time. It may also make them drop their items. However, the game designers are nice enough to give the opponents in the way a warning alarm. A defense against a Bullet Bill is being equipped with a Star. You may also avoid this item if they are far ahead of the person using it, or out of the flight path, which may allow some overtaken players to easily regain their place.

While this item is undoubtedly a powerful force that could help you catch up easily, it can sometimes be a curse. When on any courses with sharp turns or obstacle on the track, the Bullet Bill may sometimes auto-pilot itself straight into them and then disappear at the most inopportune time possible, causing the kart to either get hit or fall off the track and lose some of the spots gained using this item. However, the pros out shadow the cons. This is also one of four items which can be used to dodge a Spiny Shell (the others being a Mushroom, a Star, and the Mega Mushroom). It can also be used to destroy the Thunder Cloud and dodge Lightning, the POW Block, and any form of shell.

Bullet Bills also appear as obstacles on the Airship Fortress track from Mario Kart DS. In Mario Kart 7, they are replaced by their larger counterpart, the Banzai Bills.

In its earlier appearances, only one player at a time could get a Bullet Bill but as of Mario Kart 8, up to 2 players can have a Bullet Bill at once. In Mario Kart 8 Deluxe, it cannot be stolen by a Boo while it is in use. 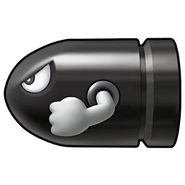 Mario racing in a Bullet Bill at Mario Circuit (Wii).

A Bullet Bill racing at Donut Plains 3 in Mario Kart 8.
Deutsch
Community content is available under CC-BY-SA unless otherwise noted.