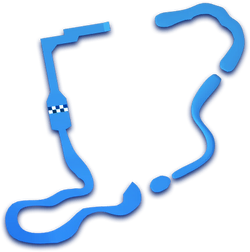 In Mario Kart DS, the staff ghost kart setup is Donkey Kong on the Standard DK and has a time of 1:43:654.

In Mario Kart 8, the staff ghost kart setup is Koopa Troopa riding the Steel Driver with Metal wheels and the Parachute glider.

Once in the next small section of the course, there is another Boost Pad on a ramp where the player is optional to use but goes slower when using the water. Next, there are many palm trees along with crabs which in the way of the player in this part and spin the player around when he/she touches a crab. However, they can simply use a mushroom to skip all of these foes by going into the shallow water, while carefully avoiding the dark blue water as it drowns the player. If correctly done, the player may move on. When having no mushroom, the player can simply drive in the S-shaped manner, pass a lighthouse in the background and optionally use two ramps, but this time without Boost Pads. Then, there are flopping Cheep-Cheeps around in the area after the two ramps which also flops the player around.

Once done, an arrow sign indicates the next section; an area with trees surrounding it. Here, a brown dirt road must be ridden on instead. Then, the player must make a small curve and another curve that is larger. He/she must go straight onto the sandy area to reach the finish line and repeat all these steps twice more.

Cheep Cheep Beach returns as a retro course in Mario Kart 8. It appears in the Shell Cup. The layout of the jungle section in the end has been modified. The course mostly looks the same, with some new details on the village houses along the dock. Players can now drive underwater, where some ramps have been added.

Waluigi near the bridge.

Rosalina about to perform a trick.

Shy Guy racing on the track.