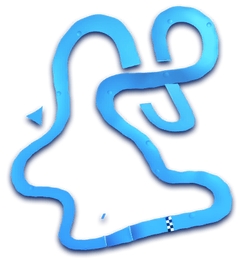 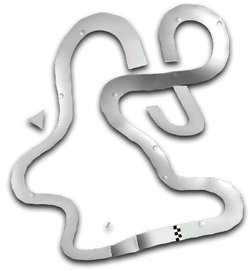 In Mario Kart 8, the staff ghost kart setup is an orange Yoshi driving the Pipe Frame with Monster tires and the Parafoil.

The track, itself, appears to be entirely made out of yellow cheese, as the name suggests. The track itself has huge turns that require drifting, and there is even a 360° turn that makes it mandatory to jump over another portion of the track. Little Mousers also inhabit this area as obstacles, making drivers having to be careful when encountering these foes.

Cheese Land makes a return as the second course of the Crossing Cup in Mario Kart 8. The track now takes place during the day. It is more sloped and is designed as a mountainous desert canyon with small amounts of vegetation, rather than as an extraterrestrial setting as in the original version.

While the Little Mousers have been removed, several Toads now spectate the course, with some next to a few tents with the top resembling mushrooms. The course also has a decent-sized anti-gravity section in it, about a third of the way into the track, with two Chain Chomps added during this segment. There are now craters that act as trick boosts and a few have items and/or coins in them.

A good view of the track's starting line.

Little Mousers can be found throughout the track.

Peach racing in the track.

One of the two Chain Chomps present in the track.

Shy Guy, Waluigi, and Wario racing in the track.

Toad racing in the track.