Choco Island 1 is a track from Super Mario Kart, being the first course in the Flower Cup. The road consists entirely of chocolate, and this is the first Track to include Piranha Plants in Mario Kart history.

At the start, the course takes a light left turn into a field of Coins. The first Piranha Plant guards them, constantly biting to try and chomp on a racer. A short right curve leads into a 90 degree left into the Item Box zone. Several small terraces make racers hop into the air. two more Piranha Plants are on either side of the next right turn. A series of hills follow, along with another pair of Piranha Plants. The next Coin area is right before two big cools of mud (or dark chocolate, if you stick with the context of Choco Island) and then another set of hills with a lone Piranha Plant. Another left turn leads right to the finish line.

In Mario Kart: Super Circuit, the track layout is the same, but the Piranha Plants have been removed and the background has been swapped to the one from Sunset Wilds. 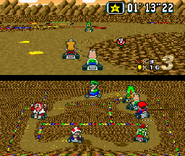