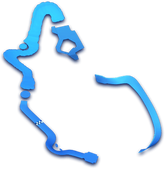 This course is an adaptation of the Sky Garden, and shares similar features, such as taking place in the sky and a giant beanstalk. It also features Bowser's airships similar to that of Airship Fortress. Furthermore, the course's name is also Sky Garden in the Japanese version.

The course's music are a Disney-like orchestral arrangement and even contains parts of the Gusty Garden Galaxy music from Super Mario Galaxy.

The staff ghost kart setup is Baby Rosalina driving the Biddybuggy with Standard tires and the Super Glider.

The race starts a giant beanstalk, shortly after there is a ramp with some Item Boxes on it, there is a Bowser Balloon that characters can bounce on, similar to the mushrooms in Mushroom Gorge from Mario Kart Wii. The racers will then continue racing on a cloud. Later, they come onto an airship, where the player encounters two paths, both of which meet up right before a cannon, which launches the player to an anti-gravity metal track inside a storm cloud.

On the track, there are many boost panels, but once in a while, lightning will strike them, which the racers have to avoid or else they will get knocked out. This section then ends to start a gliding section, which touches down on a giant stone ? Block. There is just one more right turn before the finish line.

Baby Mario at the starting line.

About to begin the race.

Racers about to approach a Dash Panel.

On a Dash Panel.

Bouncing on a Bowser Balloon.

Cutting a turn before approaching some Coins, a ramp with a set of Item Boxes, and the airship portion of the track.

The airship portion of the track.

About to blast off in the cannon.

Gliding, about to approach the storm clouds portion.

Many Dash Panels and lightning ahead.

About to approach a Dash and Glide Panel, and a set of Item Boxes.

Making the last turn before entering the second lap.

About to enter the second lap.