Coconut Mall is the second track of the Flower Cup in Mario Kart Wii. The track takes place at a mall (hence the name).

Inside the mall, there are escalators that switch direction every once in a while, though sometimes they'll both come to a halt. The Pianta in between the sets of escalators will wave his arms to the right set of escalators you should take. There's also a garden where there are Dash Panels and small patches of grass and an Item Box filled fountain where aerial tricks can be done. Near the end, there is a parking lot with more Dash Panels and moving cars to block the way. If you have any Miis registered on your Wii, other than your own, they will be driving these cars, if you hit them, you will flip on a "360" degree angle. And many of your other Miis appear on the various posters throughout the mall, taking the looks of celebrities and athletes. There is a shortcut right when you're going to go down the escalator, go to the right into the store for a shortcut.

This track reappears in Mario Kart 7 as the third course of the Banana Cup. In Mario Kart 7, the escalators show what direction they are moving by blue and red arrows pointing in the direction they are moving instead of no arrows to show which direction they are moving. This resembles the design of the conveyor belts in Toad's Factory. The Dash Panels are also changed from changing into various colors to the original design, the Dash Panels staying orange the whole time. The Piantas and Miis inside the mall have been removed, the Mall's exits have two Glide Panels. Also, there are only two Mii Drivers in the car park and they move a lot quicker this time and lift their cars up after every stop. 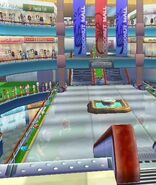 Another view of the first fountain.

Bowser Jr. at the start of Coconut Mall.

As seen in Mario Kart 7.

Retrieved from "https://mariokart.fandom.com/wiki/Coconut_Mall?oldid=75500"
Community content is available under CC-BY-SA unless otherwise noted.