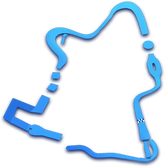 DK Jungle is the first track in the Special Cup in Mario Kart 7 and the last track of the Banana Cup in Mario Kart 8. The course is based on the Donkey Kong series, with some elements making an appearance in this course, including Tiki Goons, Screaming Pillars, and also DK's House.

In Mario Kart 8, the staff ghost kart setup is Donkey Kong driving the Varmint with Monster tires and the Super Glider.

The track passes through a jungle, where some DK Barrels appear. After going out of the jungle the drivers have to bounce on a large, red flower to land on a path near waterfalls and a lake. DK's House appear there and some Tiki Goons move on the track.

The course continues in a second jungle, similar to the first with Frogoons, before going in the Golden Temple. After some turns, past the gold banana, the drivers have to glide over a lake where several Screaming Pillars stay and once in a while scream shooting out air to blow back hanggliding players. Finally, they land and with a trick ramp and rejoin the first jungle.

DK Jungle returns as the final course in the Banana Cup in Mario Kart 8. In this rendition of the course, some objects are changed and replaced; the entrance to the temple is now slanted upward and acts as an anti-gravity section, and the mud near the beginning of the track is absent.

The layout remains the same, except for the anti-gravity section. The course has updated graphics and lighting. Giant Pillars replaces Screaming Pillars and they now exhale smokes when they are shouting, and Tiki Goons have had their movement speed severely reduced.

A small overview of the course.

Donkey Kong and Mario, driving through the jungle.

Roy performs a trick before reaching the giant flower.

Donkey Kong racing in the temple.