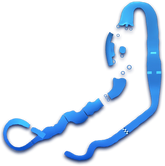 Dolphin Shoals is the second course of the Star Cup in Mario Kart 8. The course takes place on a beach with dolphins swimming around and an undersea cave.

The staff ghost kart setup is Wendy driving the Landship with Wood wheels and the Bowser Kite.

The course starts in a lake. There is a right turn coming out of the lake and then leading back underwater with three ramps in the section. One on the left, one on the right, and one straight ahead. There are rings where the players jump over the ramps, where dolphins also jump through.

After that section, still underwater, there is a left turn leading the players to an undersea cave, where two paths split. The left path leads to an area where players float above pipes blowing water bubbles keeping the player floating, where they can also perform a trick on. The right path is a shortcut split with two other paths, one with the water blowing pipes going to a platform with a boost platform and one where it leads to a small cave section with two boost platforms.

When the two paths meet, there is a boost ramp where players jump over along with more water bubble pipes, with a giant Unagi in front of it. Players can drive over the it's body, where coins appear at the tip of it. If players fall they can just drive under it during the section. After that, players activate the anti-gravity mode and jump off a ramp out of the cave and goes to a platform held with rocks that is tilted almost sideways. There is another ramp on the track after which there is a gliding section. Players fly over a water rapid then land back on the track where there are a few more turns, going back underwater and leading to the finish line.

Yoshi on the Wild Wiggler, racing with Mario, Toad, Daisy and Luigi.

Yoshi on the Wild Wiggler, racing with Donkey Kong and Toad.

Dry Bones and other racers at the starting line.

Dry Bones at the starting line, preparing for a race.

Drifting around the first turn.

Underwater, about to approach some ramps.

About to approach a red Pipe.

About to approach some more Pipes.

About to approach the Mega Unagi.

On top of the Mega Unagi.

Passing through a Anti-gravity panel.

Performing a Mini-Turbo on a sharp turn.

About to approach a Glide Panel.

About to glide into the water.

Dry Bones holding a Bob-omb, about to enter the second lap.