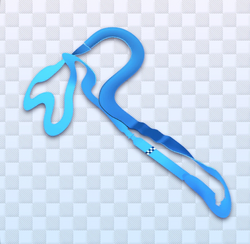 The stage has an ancient Chinese theme, taking place in and on a giant dragon resembling Gobblegut. Throughout the course, various statues and murals of Lakitu appear.

Coincidentally, the staff ghost kart setup is Lakitu driving the Varmint with Monster tires and the Cloud Glider.

The course starts out with the player going into a Gobblegut's mouth, and through a dojo-themed tunnel. Throughout the tunnels, images from the original Super Mario Bros. can be seen at the top of the walls. After a set of zigzagging turns, players exit the dragon, although continue to drive on its exterior.

After several winding turns, players will loop back and drive over the finish line. Here, several bumps work as ramps giving an opportunity to perform tricks. After an additional turn, the characters return to the finish line.

An anti-gravity section of the track, with hanging lanterns.

Baby Luigi about to exit the dojo-themed tunnel.