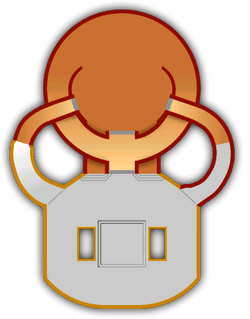 Dragon Palace is a battle course that appears in Mario Kart 8 Deluxe It is one of the five new battle courses introduced in the game. The map's theme is Chinese (similar to Dragon Driftway). There is a courtyard with Koopa Troopas practicing kung fu and chanting, which can be heard, as well as two statues of Gobblegut. There is also a two-story pagoda that racers enter by breaking screen doors. Inside the pagoda is a circular room with stairs that access the second floor.

The design is Chinese themed. It has two Gobblegut statues, as well as a huge pagoda.

The tracks's icon.
Deutsch
Community content is available under CC-BY-SA unless otherwise noted.