Dry Bones is a subspecies in the skeletal form of Koopa Troopa. A driver in a few Mario Kart games, after appearing as Mario's enemy in his many previous adventures. He has appeared in Mario Kart DS and Mario Kart Wii as an Unlockable racers, and as a starter character in Mario Kart 8 Deluxe, he was confirmed in the reveal trailer for Mario Kart 8 Deluxe. He usually adds a great handling, acceleration, and mini-turbo boost to his Karts, but as a consequence, they have low top speeds.

Dry Bones is a skeletal version of the Koopa with very light grey bones. His gloves and boots are a pale teal-like colour, with the underside of his boots a brownish orange. The back of his shell is grey with cracks, and The front of the shell acts as his rib cage too. Dry Bones’s mouth has sharp, fang-like extrusion, unlike the normal Koopa, and Dry Bones’s eyes are gaping black eye sockets with yellow pupils. His arms, legs and tail are just bones and bend normally despite the lack of joints.

Dry Bones after he is unlocked in Mario Kart Wii.

Dry Bones in his Blue Falcon. 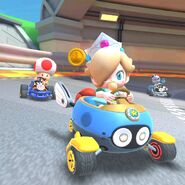 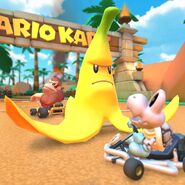 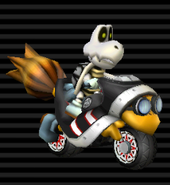 Dry Bones in his Magikruiser.