Dry Bowser is the skeleton version of Bowser, as you might have guessed from looking at the picture of him above. He is reminiscent to Dry Bones, who is the skeletal counterpart of Koopa Troopa. Dry Bowser's legs are made out of a lot of small little bones. His arms are a little less detailed, but still have the same frightful white-gray shade of the rest of his ghastly body. His rib cage is visible, and Dry Bowser's shell has turned a dark, black color. His tail, along with his feet, hands and shell, are still covered in deadly claws. His bands around his arms, wrists, and neck are now a maroon color, and they too are covered in sharp, spiney spikes. His face is still in the same shape as classic Bowser, but it too has been burned to only a skull. He has jagged teeth, and threatening black eyes with small, yellow pupils. Dry Bowser has horns sticking out of his head, and even though he has no skin, his flowing, red hair remains intact. Also, he got tired of his old hairstyle, so he decided to change it up and now wears his mane in a ponytail (similar to Bowser Jr.). His roar is now a rasping, hoarse growl. You wouldn't have much of a voice either if your vocal cords were exposed to red-hot lava. 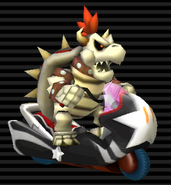 Dry Bowser in his Shooting Star. 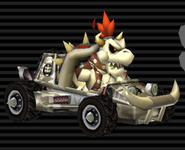 Dry Bowser in his Offroader.

Dry Bowser in his ATV. 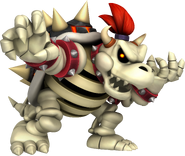 Dry Bowser with the other characters in Mario Kart 8.
Deutsch
Community content is available under CC-BY-SA unless otherwise noted.