Electrodrome is the third track of the Star Cup in Mario Kart 8. Banners with the Star Cup logo can be seen throughout the track, as well as some big screens displaying characters dancing, spectrum analyzers, and the MKTV logo.

The staff ghost kart setup is Larry driving a Sport Bike with Monster tires and a Super Glider.

The course starts directly in front of a gliding panel. After the racers glide down to the road below, there is a turn going left. Shortly after the turn, there is an anti-gravity area curving to a wall that soon splits into two roads, one pink and one green. In the area where the music changes, transparent squares of the road's color appear in the edge of the screen. The roads twist around each other before connecting. At the end of each road is a gliding panel leading to a large neon platform with the words "Star Cup" on it, as well as the cup’s logo. There is a small jump at the end of the platform and a left turn that leads to the finish line. 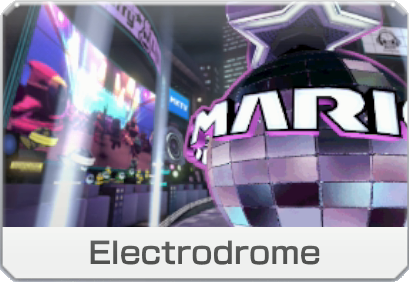 Roy, Larry, and Wendy on the track.

Wendy, Larry, and Roy racing on the track.
Koopa and Shy Guy stamp.MK8.png
The Stamp unlocked for beating the Staff Ghost on this course.

Retrieved from "https://mariokart.fandom.com/wiki/Electrodrome?oldid=75179"
Community content is available under CC-BY-SA unless otherwise noted.