A Feather lets a player jump over obstacles and Items.

A Feather will let any racer who is equipped with it do a high jump into the air. It's a useful recovery Item when you're driving on a track with many edges and shortcuts that were otherwise inaccessible without a Feather. However, it is a dangerous Item to use on courses that have barely any railing and large areas that you can fall off the track, such as Bowser Castle 3. So one has to be careful as not to fall off the edge of the course.

Feathers can also be used defensively against Items such as Green Shells and Bananas. You can evade an incoming Green Shell (or a Red Shell) by hopping over them.

The item is almost the same, however, it is only usable in battle mode. It can be used the steal a balloon in Balloon Battle, the Shine in Shine Thief, and some coins in Coin Runners, and it works just like a Mushroom. The Feather gives you the ability to perform a spin jump for a trick.

A screenshot that shows the unused sprite. Look at the top, next to "TIME." Note that Mario is in 3rd place.

A screenshot from an unknown source that shows this item. Note that Toad is in 3rd place. 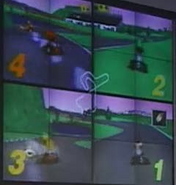 Screenshot from a panel at Shoshinkai(?) Note that Toad is in 1st place this time.
Deutsch
Community content is available under CC-BY-SA unless otherwise noted.