Figure-8 Circuit is the first track of the Mushroom Cup in Mario Kart DS. Seen from a bird's eye view, this track, as its namesake implies, is shaped like a typical figure-8. It is very simple and is one of the easiest tracks in the game. This course is perfect for straightforward racing, due to the fact that there are rails, no obstacles, no boost pads, and very little off-road. One part of the track overlaps another on a brick bridge. The course has a large crowd seen at the start and you can hear cheering and talking near the finish line. When players take turns, they may run into the small fields of grass, slowing them down. There are giant 2-D blocks, sound boxes, and a pitstop building at the track edge. Snaking is easy due to the wide course. Many signs are on the side, and they say stuff like Shoot!! with a Red Shell, Peach Grand Prix, Super Mario with Stars, and Dangerous with a Chain Chomp. In the background, you can see pipes, trees, and a blue sky with clouds. It is the prequel to Mario Circuit and has the same music. Missions 1-1 and 2-2 are held here. In 1-1, Mario has to drive through all 5 numbered gates in order. In 2-2, Yoshi has to collect all 10 coins. The staff ghost uses Mario in the Red Kart and the Standard MR. At the end of each cup, the Award Ceremony takes place at this track. It is also the first and so far only unowned circuit racetrack in the series. This circuit has not appeared in a recent Mario Kart game, but strangely enough, this circuit does not appear in Mario Kart 8, despite it being shaped like an 8. 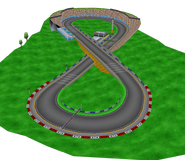 The model of the track.
Deutsch
Community content is available under CC-BY-SA unless otherwise noted.