Not to be confused with Flame Rider or Flame Runner.

The Flame Flyer is a large-sized kart resembling a sweet muscle car from the 60s era, with a souped-up engine poppin' out the hood and flame decals. It's featured as one of the three default karts open to heavyweights in Mario Kart Wii.

The basic frame of the Flame Flyer is pretty much a block with a few accented edges. The front end of the kart starts to close in slightly, ending in a silver lining that encloses the metal grilles and headlights. Towering over the top of the hood is a huge engine, which could probably obstruct the driver's view as much as a Blooper... the motor has 6 tubes running down underneath the plates, presumably connected to the exhausts, and a circular panel covers the grated front. Even atop this section is a set of three pistons, connected to a hatch leading into the inner machinery. The bottom half of the Flame Flyer drops off a bit. Right underneath the doors are three outward-facing, chrome turbo pipes on either side. The character's logo is displayed on the sides, and the dark gray tires are specially marked with the newer Mario Kart logo. Two thin fins parallel to each other face the back, slanting right where the seat ends. Vicious looking flame designs have been pasted on the hood and back fins, finishing up the look of complete intimidation.

Wario in his Flame Flyer.

Waluigi in his Flame Flyer. 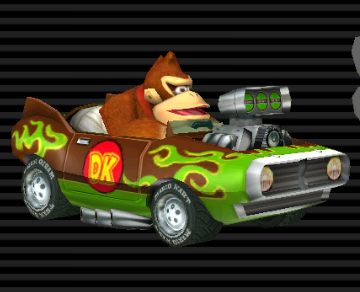 Donkey Kong in his Flame Flyer. 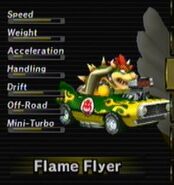 Bowser in his Flame Flyer. 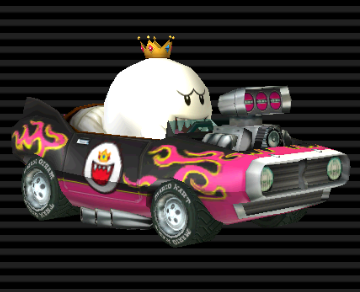 King Boo in his Flame Flyer. 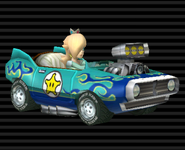 Rosalina in her Flame Flyer. 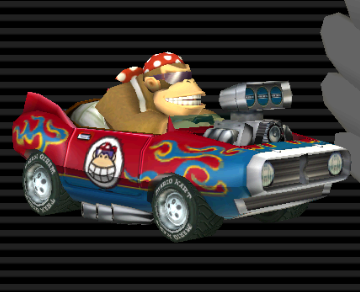 Funky Kong in his Flame Flyer. 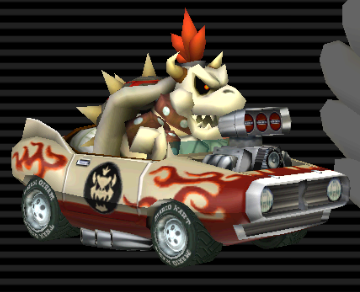 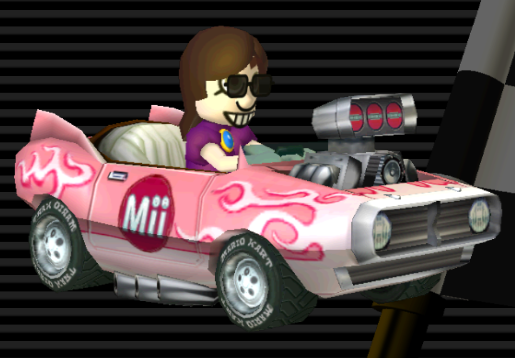 A Female Mii in her Flame Flyer.

A Male Mii in the Flame Flyer.
Add a photo to this gallery

Retrieved from "https://mariokart.fandom.com/wiki/Flame_Flyer?oldid=79888"
Community content is available under CC-BY-SA unless otherwise noted.