Ghost Valley 1 is the third track in the Mushroom Cup in Super Mario Kart. It was the first track in the Mario Kart series to feature Boos and bottomless pits. It is based off the Ghost (Boo) Houses in Super Mario World. The track was built in January 5, 1993. There is a shortcut here. Towards the end of the track, near the U-turn, you can hop across to a narrow bridge. It is right next to the finish line. Caution: In 50cc, your kart will be so slow to hop across and fall into a bottomless pit. To be safe, you should use either a mushroom or a feather. Also, there are about 5 or more coins. This course has not appeared in a recent Mario Kart game yet. Though it did reappear in Mario Kart: Super Circuit in the Extra Mushroom Cup. The background, instead of being Boos it is the background of Boo Lake. 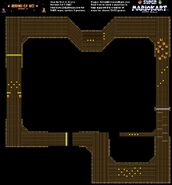 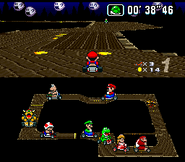