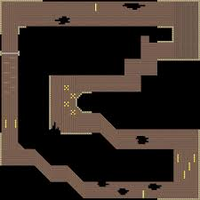 Ghost Valley 3 is a shady racetrack in Super Mario Kart made entirely out of wood. Although no obstacles (besides Boos' intimidation), some sections of planks are so rotten that holes have opened up in the ground. It's the final track in the Ghost Valley trio, and the third track in the Special Cup.

In Mario Kart: Super Circuit, Ghost Valley 3 returns along with all the other Super Mario Kart tracks, it's almost exactly the same as the original, and is the second track in the Extra Special Cup.

The course begins on a wide expanse of boards, with sections of walls (that cheaply break away once hit) dotting the outside. In the background, a multitude of Boos float around above a dark forest in the horizon. A patch of 8 Coins right in front of the checkerd line gets players off to a fast start. A right ninety degree turn follows and opens up into a long straightway. Heading to the right side will see yourself having to be rescued by Lakitu after falling in a murky pit. More sensible racers will side to the left, where Question Blocks and a Jump Pad are provided. Another crack in the boardwalk comes directly after the Question Blocks, and then a sharp U-Turn has to be taken. More Coins are spread out across the floor of this section which consists of square, borderless planks. A second 180 degree turn with the edges chipped away comes afterward, with a patch of 5 Coins provided. It's quite hard to collect all of them though, as players usually need to Drift at this turn and therefore have less steering capabilities.

Next, the pathway slants slightly to the right at a line of Coins, opening up to a wide-ranging, unguarded section of planks; the only problem is that not all the room can be used in comfort... a gaping hole lies in the center. A third U-Turn comes up, and when it straightens out, drivers have to be ready- two more holes in the wooden road come appear, one bordering the edge, and the other on the opposite side. Because of the difficulty in maneuvering this part, a Zipper-Jump Pad combo is provided right in front of the second gap to propel players over. But excellent aim is needed to land squarely back on the road, as its width drops considerably, and a crack lays on the right side. Racers then need to cross the zig-zagging, wall lacking path ahead, which gratefully has some Coins. A curve to the right leads players back to the starting point.

As for the direction of the turns/path and placement of holes, Mario Kart Super Circuit's version of Ghost Valley 3 resembles the original pretty well. Question Blocks at the beginning have been replaced by a row of 3 Item Boxes, and the first U-turn is laden with a plentiful 20 Coins. The second 180 degree turn has four lines of five Coins spread across, and the Zipper has been removed, compensated with an Item Box at the foot of the Jump Pad. Also, the straightway at the end has two streaks of 5 Coins, redistributed from the previous straight path. Aside from these factors, the backdrop of the course is now filled with steep, pointy mountains underneath a stormy, night sky. The background is now the same as GBA Broken Pier.

Retrieved from "https://mariokart.fandom.com/wiki/Ghost_Valley_3?oldid=78936"
Community content is available under CC-BY-SA unless otherwise noted.