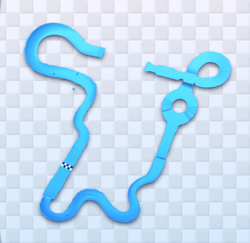 Hyrule Circuit is the fourth and last track of the Triforce Cup in Mario Kart 8 and Mario Kart 8 Deluxe. It is, obviously, the home track of Link.

In this track, rupees replace coins, and Deku Babas and Keese replace Piranha Plants and Swoopers.

The staff ghost kart setup is Link driving the Master Cycle with Triforce Tires and the Hylian Kite.

The track starts at Hyrule Field, as it zigzags through a grassy area. Several ramps can be found here, before a gliding pad that sends the player into Hyrule Castle. After a U-turn, the player arrives in a grand hall with the Master Sword resting in a Triforce-shaped pedestal. The routes split at the sword, before merging directly afterward. After a jump out the back of the castle, the player lands in a small village before going through a valley with Deku Babas. After a final jump, the player returns to the start.

An interior view of Hyrule Castle.

The gliding portion of the track.

An aerial view of the track with Rosalina in the foreground.