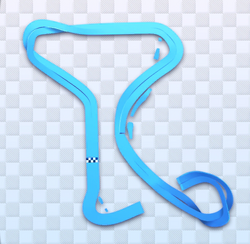 The staff ghost kart setup is Tanooki Mario driving the Tanooki Kart with Monster tires and the Super Glider.

The track starts in a place near where six tents are set up. Toads can be found here, cheering the racers on. The track will then start to split up, with a choice of a green track going downward, or a yellow track going upward. The tracks rejoin inside of a cave. The path continues on before players go into anti-gravity mode where the path splits again.

After alternating heights, the paths intertwine again while they turn more sharp to the left with a steep incline which leads to a glide panel, taking you back to the starting point.

The track during the start of a Grand Prix.

A view of the anti-gravity section.

Rosalina on the anti-gravity section of the track.

A light-blue Shy Guy at the gliding area.