The Jetsetter (known as the Aero Glider in PAL regions) is a large kart in Mario Kart Wii. The Jetsetter resembles a Le Mans Prototype race car, and the body has a similar design to the Streamliner, especially when used by Waluigi, but has more of rectangular shape as opposed to the Streamliner's wedge-shaped body. The Jetsetter features a three-pointed nose with the middle point shorter and thicker. It has blue wheels, rear fin and a single dual exhaust port in the back. It is unlocked by receiving at least a 1-Star rank in all the 150cc Retro Cups or by playing 4,500 races.

The Sprinter (its rough equivalent in middle-sized vehicles) is also very similar to the Jetsetter in shape, though the Sprinter is more clearly modeled on Formula One race cars.

The Jetsetter's bike counterpart is the Spear.

The Jetsetter is the fastest vehicle in the game. If it is used with Funky Kong, it is the fastest character/vehicle combo. Although its weight is lowest out of all the large karts, it is still high enough to bump others around, but is the lightest large kart. But as a compromise for its great speed, it has the worst handling, off-road, and mini-turbo in the game. Its acceleration is tied with the Wild Wing, and it also has one of the lowest drift stats in the game. It is very difficult to use on tracks with sharp turns like SNES Mario Circuit 3. 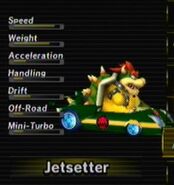 A Female Mii in the Jetsetter.

A Male Mii in the Jetsetter.