Despite being an excellent handler, King Boo is a mid-tier character for his poor raising stats. King Boo is often used for courses with tight turns, such as Rainbow Road. Although in the mid-tier placing, King Boo has excellent rivalries with other characters and has excellent racing skills, making him a character with high-tier or highly possible, top-tier character categories since his handling stat raises any kart or bike, including the Spear. He was never a default playable character until Mario Kart 8 Deluxe.

King Boo is the king of all the Boos. His body is a ghostly white color, most likely because he is a ghost. He has a round shape with two arms on either side of his body (or face, it's tough to tell), and he has a tail. He always has his mouth open in a haunting manner, so his tongue and sharp teeth can be seen quite clearly. King Boo has black eyes. So, with that being said, what makes him different from a regular Boo? To fit his role as the king of the boos, King Boo is noticeably bigger, and he has a royal golden crown with red and blue jewels encrusted in it.

King Boo shares his karts with the other heavy characters in Mario Kart Wii.

King Boo's nature as a ghost made him the staff ghost of mainly ghost-themed tracks. 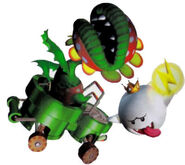 King Boo in His Jetsetter. 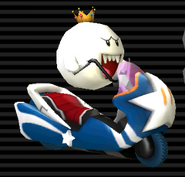 King Boo in His Shooting Star.

King Boo in His Flame Flyer.