Lemmy Koopa is one of the seven Koopalings, who are Bowser's minions. He made his debut to the Mario Kart series in Mario Kart 8 and was playable for the first time in any game. He also has a tire service, named "Lemmy's Tire Service".

He is voiced by Carlee McManus.

Lemmy Koopa is assumed to be the second oldest of the Koopalings. In New Super Mario Bros. Wii, Lemmy Koopa's preferred weapons were bouncing balls that would knock Mario off the edge. Is there really any weapon that is better than bouncy balls? Nope, and that's why he chose them.

Lemmy Koopa is a golden-yellow color like all other Koopas. He has black spike bracelets, and his shell is orange and also covered in spikes. His head happens to be green with two orange markings on either side. Lemmy Koopa's hair is very long, and it is divided in six section, each of them being yellow, pink, or blue. He also has a yellow ponytail on the back of his head. On his hands and feet, he has sharp white claws, he has four fingers on each hand and three toes on each foot. He also has white pads on the plant of his feet.

This is Lemmy's first appearance in the Mario Kart series. He is a lightweight, along with other Koopalings (Larry Koopa, and Wendy O. Koopa). He is the staff ghost racer for GCN Sherbet Land.

Lemmy is an unlockable character in Mario Kart Tour along with other Koopalings. He is being a ''Normal'' Character and his weight is possibly Light. 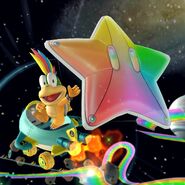 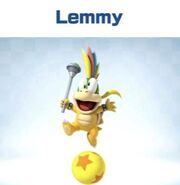