Makes everyone but the user drop their items, also making them smaller, slower, and high-pitched in voice.

Lightning (also called the shock or Thunderbolt) is a powerful attack item that appears in all games in the Mario Kart series. Racers will receive these when they're either in, or close to, last place.

When the Lightning is fired, all the racers except the user will be electrocuted by a sudden electric arc that appears over them, making it a great recovery Item. When they are struck, they spin out, lose any of their Items (in Mario Kart: Double Dash!! onwards) and shrink down to a smaller size, slowing them down. The effect wears off after a different amount of time depending on the game and which position the victim is in. In some Mario Kart titles, if a player has been electrocuted by Lightning and a regular sized character runs you over, the racer will get squished, losing even more speed.

In Mario Kart 64, if the player runs over a player who is small while he or she is big, they will be squished for a while even if the launcher is a lightweight and the lightning-stricken player is a heavyweight. If two small people run into another they both will be squished. If they hit an obstacle such as a Thwomp they will be pushed back and be squished. The only exception is an explosive type of obstacles such as Kalamari Desert Train, or Snowman. Hitting in considerable speed may often cause you to spin out and recover faster.

In Mario Kart: Super Circuit, when this item is used, the music stops playing and then restarts after all shrunken drivers return to normal size. The shrunken drivers will spin out if coming into contact with another driver.

In Mario Kart: Double Dash!!, it won't affect the player if he or she is currently indisposed (such as having just been hit by another item or fallen off a cliff).

In Mario Kart DS and Mario Kart Wii, the effect of being hit by a Lightning wears off quicker the lower in the rank you are. For example, someone hit by one while in 7th/11th place will return to normal almost immediately, while those in 1st or 2nd place will remain shrunk for much longer. Also, the background music of the track will be sped up and raised in pitch. In Mario Kart Wii, a racer who is super-sized from using a Mega Mushroom will be returned to normal size when struck by the Lightning instead of shrunken completely. There are also two items (POW Block and Thunder Cloud) that act similar to the Lightning, but with a few differences. If the Lightning is used in a team match, it will only affect the players on the opposite team. In Mario Kart Wii, the Lightning can appear in Battle Mode, but it will neither pop the victims' Balloons nor give the user any points.

In Mario Kart 7, Mario Kart 8, and Mario Kart 8 Deluxe, the Lightning acts similarly as in Mario Kart 64, in the fact that racers who are small can get run over. In Mario Kart 8 only, the victim will lose their Items even if they were under the effect of a Star at the time. The Lightning can also appear in Battle Mode in Deluxe (just like it did in Wii), but it will not pop the victims' balloons, nor will the user get any points from it.

In Mario Kart Tour, the Lightning still acts as it does in the latter games of the series. It can be obtained in either 7th or 8th place, with certain gliders increasing your chances of getting one. Characters that can have three item slots in a race can get a Lightning Frenzy, which, while in use, chooses a random opponent to shock, shrinking them and spinning them out, making them lose any held items. 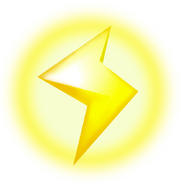 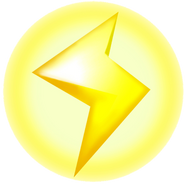 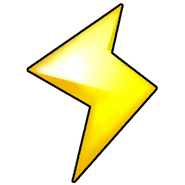 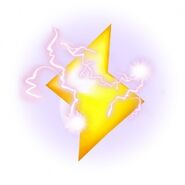 A photo from super smash bros
Add a photo to this gallery
Retrieved from "https://mariokart.fandom.com/wiki/Lightning?oldid=83318"
Community content is available under CC-BY-SA unless otherwise noted.