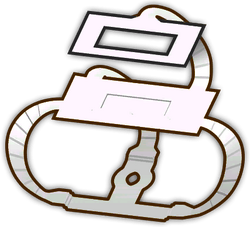 The name and course design are based on the game of the same name, which was one of the launch titles for the Nintendo GameCube. This is the most complex battle stage in Mario Kart: Double Dash!! as there are two floors, which are a hallway and a ballroom. There are three entrances into the hallway, all of which lead to a central point and can create some tight battles. The ballroom is just a flat room and the main "hub" of the mansion. Boos will occasionally appear on the second floor and make their "Boo cackle". The roof has one entrance, but a large hole in the middle drops back down to the second floor. The stage can be unlocked by winning first place on the 150cc Mushroom Cup.