Luigi's Mansion is an eerie Mario Kart track based on the series with the same name. The map features a gigantic, dark green haunted house, collapsing chandeliers, creeping trees, and shaking or popping-out portraits.

The road begins in the center of a spooky forest, the Boo Woods, at night. The full moon sheds a bit of light on the track, exposing decaying trees and mossy crypts on the grassy ground. Up ahead, barely silhouetted in the night sky, is a humungous mansion with multiple floors. So, the sandy path, which seems to be glowing green, slightly curves to the left and then about 20 degrees to the right. A left turn gets the road going on a straight path to the house, gated by a corroding stone wall with barbs on top. The track slopes upward, with the outlying patches of grass rising above the road to make sure no one tries to drive off into the grassy fields surrounding the haunted dwelling. The entrance to the mansion is quite ornate, with carved sculptures decorating the borders of the stairway, a high arched door, and even a set of Item Boxes.

The interior of the house has fancy red carpeting with yellow trimming throughout, as well as gray walls. The far section of the upper floor is roped off, where the carpet is tannish maroon. Multiple creepy portraits hang from the walls right here, including Boo and Bowser. Overhead, a huge, four light chandelier keeps almost falling, but slowly picks itself back up. From here, the hallway slants downward and goes into a sharp hairpin turn, with a few more pictures hanging from the walls. These hallways are kinda hazardous when there's Green Shells bouncing through the house corridors. The main lobby comes up, with another improperly bolted down chandelier (or simply just possessed.) A very unnecessary block lays smack in the middle of the room, forcing players to go around it, no other alternatives at all. Passing a few more frightening photos and 1 more chandelier, the back door of the mansion comes next, leading drivers into a cave carved completely out of stones. After this straightway and another set of Items, the blackened sky, and scary woods approach...

Players then drive back onto the sandy path, which winds rapidly around several dead trees and a stone crypts. A 90 degree left turn is succeeded a right, then left swing on the road. Not too hard, but unprepared players sometimes just can't keep up with the pace ('specially on 150cc) and head into the Off-Road, super-slow grass. Another stone wall follows, with the metal gates drawn to the side to allow entry into the more forested area. But some of the trees are more... active here. While curving right, one of these ghastly trees sidesteps the area, which often brings racers to a sudden halt. There movements, like Sidesteppers, are unpredictable, so the best thing to do is don't even get close. All throughout this section of Luigi's Mansion are also bloodcurdling Boos flying around the track, but luckily they don't grapple on to you like in previous encounters... (Broken Pier as an example.)

A left turn guarded by a walking tree leads players to the last stretch, a wide field covered with reddish-brown mud, a few patches of road, and more relentless trees. While slowly but steadily heading to the right, the first portion of sand comes up to the right side of the widened road, which boasts a few circling Item Boxes. A red arrow sign posted ahead advises racers to Drift sharper to the left. Although the red dirt slows you down just barely and causes mud to flare up behind your tires, Drifting through it will make passage a whole lot faster. A short straightway comes up, with edges of green sand lining the mud and a tree scouting it. Then, more arrows direct players to round a buildup of trees, with the path easing right. Two more road patches and a mobile tree appear on this part, and then a final left curve with one more ambling tree lead back to the finish line. This track belongs to Luigi.

A few additional features have been added to the new Luigi's Mansion course for the Nintendo 3DS, such as the Boo portraits in the hallways coming to life and jumping out at players, and a Glider Ramp on this second half of Boo Woods. This course belongs to Luigi. 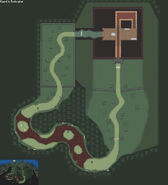 Overview of the DS map. 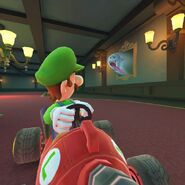 Luigi at the course
Add a photo to this gallery

Retrieved from "https://mariokart.fandom.com/wiki/Luigi%27s_Mansion_(track)?oldid=82052"
Community content is available under CC-BY-SA unless otherwise noted.