N/A
A Luma (チコ) is a glistening, friendly star that could first be found in Super Mario Galaxy for the Nintendo Wii. Similar to Starmans, these multi-colored beings help Mario on his quest and have amazing powers, such as galactic transformation. They consider themselves the adopted children of Rosalina and thus are very faithful to her.

Lumas are characterized by having five points on their raindrop-like bodies, with the bottom two being their legs, the middle two being their arms, and the top as their head. They have very large and usually black eyes. Most Lumas lack mouths, although they are still able to communicate. Lumas come in a variety of colors, including yellow, green, blue, apricot, orange, red, black, purple, cyan, and pink (Yellow is the most common).

A yellow Luma likes to tag along with Rosalina when the player races as her. He circles around her vehicle, and whenever she performs a Trick or hits a Dash Panel, he squeals with delight. But it's not all fun and games... the Luma will also scream in pain when he's rocked by an explosion.

Although Lumas don't accompany Rosalina or her baby counterpart in Mario Kart 8 and Mario Kart 8 DX, multiple signs of the "Galaxy Air" sponsorship can be found posted throughout Tracks, and they feature a yellow Luma in the logo.

The Star Cup trophy features a Luma on the backside.

Also, a couple of yellow Lumas can be seen in the DLC track (or regular track in Mario Kart 8 Deluxe) GBA Ribbon Road.

Rosalina with a Luma and her turquois Standard Kart L. 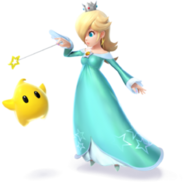 A Luma with Rosalina in Super Smash Bros. for Nintendo 3DS/Wii U. 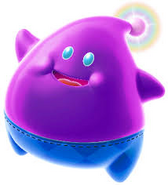 Lubba, the leader of the Lumas.
Add a photo to this gallery
Retrieved from "https://mariokart.fandom.com/wiki/Luma?oldid=85206"
Community content is available under CC-BY-SA unless otherwise noted.