The Mach Bike is a middleweight bike made its debut in Mario Kart Wii. It resembles a superbike usually seen in motor racing. It is one of the bikes you can use when you play 100cc or 150cc Grand Prix, as you don't need to unlock it. The Mario Kart 8 bike counterpart is the Sport Bike. It is an inside drift bike.

The Mach Bike is a fast bike with the highest drift and mini-turbo stats for medium bikes. It is not really as fast as the Flame Runner but the outstanding Mini-Turbos boost can help make up for this. It has world records for tracks that need a lot of drift or relies more on the mini-turbo stat than the speed stat, such as SNES Mario Circuit 3. Commonly found on Time Trials and even in normal races, it is one of the most used bikes in this game, alongside the Flame Runner. This bike has average weight and handling, but terrible acceleration and off-road stats. 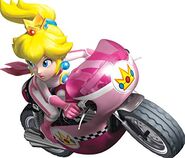 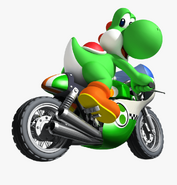 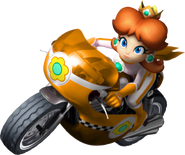 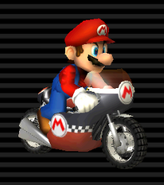 Mario in his Mach Bike. 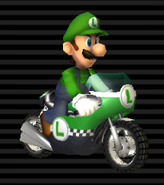 Luigi in his Mach Bike.