Mario is the main protagonist and namesake of the Super Mario series, making his first video game appearance in Donkey Kong (1981), originally known as "Jumpman". Since then, he has repeatedly defeated Bowser, who constantly takes Princess Peach hostage. His younger brother is Luigi.

He appears as a plumber, with a red hat, shirt, and blue overalls.

In 1992, a spin-off of the Super Mario games was released, Super Mario Kart, with Mario being the namesake for the game. Since then, Mario has been the main character in the following titles, helping Mario Kart become the icon in the video game industry that is.

Mario is the hero of the Mushroom Kingdom, but he is also a plumber. He is a guy who likes to jump and has an Italian accent. He commonly wears brown shoes, blue overalls with two golden buttons, a red long sleeved shirt and white gloves. He has a black moustache, but he has brown hair. His catchphrases are "It's a Me, Mario!", "Oh Mama Mia!", and many more. He has a red cap with his initial M on it, which is also his logo in all of the games except Super Mario Kart.

Mario made his first appearance in Super Mario Kart as a standard racer. He is in the Balanced Class with Luigi, with fair acceleration, top speed, weight, and control. His AI item is the Starman, which grants him invincibility for a brief period of time.

**Both Retro Track and Nitro Track 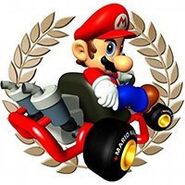 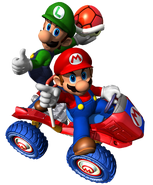 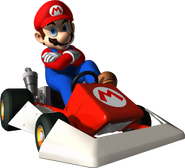 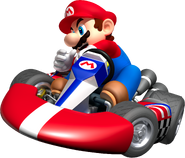 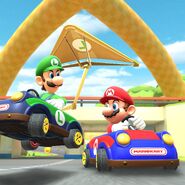 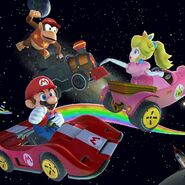 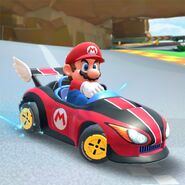 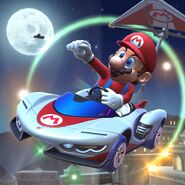 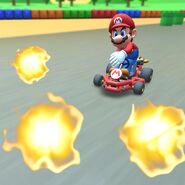 Mario in his Wild Wing
Deutsch
Community content is available under CC-BY-SA unless otherwise noted.
Advertisement