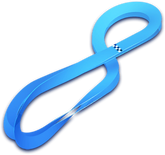 Mario Circuit is the first track of the Flower Cup in Mario Kart 8 and Mario Kart 8 Deluxe. This Mario Circuit's layout is designed after the Möbius strip (a closed surface consisting of only one side) to make full use of the new anti-gravity aspect of the game.

The staff ghost kart setup is Mario driving the Standard kart with Standard tires and the Super Glider.

The track follows a single path that twists around near the beginning. The track remains fairly simple regarding design. Players start on the straightaway, and shortly after, there is a turn to the left; a white bridge which starts the anti-gravity section must be crossed first.

The track then turns to the right shortly after and starts racing underneath the finish line. After a left turn, the racers cross the white bridge again, which twists the track back to normal and after another right corner, the racers approach a gliding ramp and Goomba Towers before the finish line.

It used to be a battle stage in the Wii U version of Mario Kart 8, but was removed in the Deluxe version.

Mario at the finish line.

Mario and some other racers, at the beginning of the anti-gravity section.