Mario Circuit 2 is the fifth and final track of the Mushroom Cup inSuper Mario Kart. This track takes it up a notch on difficulty compared to its predecessor, with sharper turns, puddles of oil, and an increased amount of Pipes.

Like all the Super Mario Kart courses, Mario Circuit 2 appears as an Extra Flower Cup track in Mario Kart: Super Circuit with all obstacles removed, not counting challenging turns. Its 3rd edition in the Banana Cup of Mario Kart 7 brings back the hazards, along with a few new additions.

The track takes place in the last Mario Circuit's setting, a wide open plain with bordering sand and colorful walls. But the number of turns in Mario Circuit 2 has greatly increased, as well as more Pipes lining the corners and patches of slippery oil lying around. Right off the bat, a 90 degree left turn leads straight into a right 90-degree turn. A few meters, and then a second left turn is taken to open up into a straightway, where players can stack up on Item Blocks and Coins. Another left turn leads into the second stretch of track, where players with a high top speed can take advantage. Once again, the road trails off into a left bend, this one curving slightly more than the last ones. A right turn gives way a lengthy portion of the track, which is borders on the sides by two perpendicular paved roads.

The next 90 degree right bend opens up to another fairly simple stretch of track- its even slightly widening. However, this is to prep players for the 180-degree roundabout, so they have plenty of power-sliding room. A small little right arch leads to the big finale- a jump over the third straightaway. A line of Zippers waits at the edge of the drop-off, as well as a few Jump Pads. Clearing the jump is highly important, as falling back to where you were just a few moments ago adds major time to your race, and may probably let other racers pass you. But once you've successfully hopped the track, its only one more left back turn to the finishing mark.

This version of Mario Circuit 2 is very reminiscent to the original: flat walls, similar driving controls, and the intensity. Sadly, Pipes and oil slicks are missing, which takes some of the challenges away. But added Item Boxes in a way make up for this, as racers now have more Red Shells and Thunder Bolt strikes than in the first opus. The background was changed to GBA Mario Circuit due to hardware limitations.

The latest edition of this classic track stays true to the original map. but adds some creative new features as well. Of course, Coin and Item Box placement is a little switched up, but aside from that, the obstacles that were missing from the previous one (namely the oil slicks and pipes) are back- also, the final jump over the portion of track has now been remade into a GLIDING section, what with the Glider addition added to Mario Kart 7. Finally, graphics have been generously upgraded, with more a more descriptive layout and 3D walls (literally 3D thanks to the 3DS!). 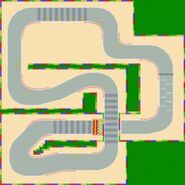 SuperMarioKart-MarioCircuit2.png
MarioKart7-SNES-MarioCircuit2.png
Add a photo to this gallery
Retrieved from "https://mariokart.fandom.com/wiki/Mario_Circuit_2?oldid=74348"
Community content is available under CC-BY-SA unless otherwise noted.