Mario Kart: Double Dash!! (styled as MARIOKART Double Dash!! and abbreviated to MKDD) is a racing video game developed and published by Nintendo for the Nintendo GameCube and is the fourth game in the Mario Kart series.

Mario Kart: Double Dash!!, while retaining gameplay elements from the previous installments ranging from selecting Super Mario characters and using items to determine a race's outcome, introduces a feature unique to this game: Two-person karts, where one character drives while the other uses items. When necessary, they swap positions. The game also introduces a variety of karts for each weight class, a feature carried over to future Mario Kart installments.

For the first and only time, two players can play cooperatively using one kart, both handling their selected character. However, Double Dash!! also has separate two-person karts. The game also introduces Special Items, which are exclusive to each pair of characters, and is one of the very few Nintendo GameCube games to make use of the Nintendo GameCube Broadband Adapter, where up to 16 players, each in a 2-person kart, can participate in a single race.

Double Dash!!'s gameplay vastly differs from and improves on its predecessors in many ways; since the player can pick not one character, but two - one to drive, and one to use items. In addition, the player is able to use karts that are not the characters' (Mario and Luigi can use Yoshi's kart, for example) depending on their class, whether they are heavyweight, middleweight, or lightweight. Not only this, the power slide has been improved; if the player makes blue sparks while power sliding, a mini turbo is performed. The rocket start is also improved as the Double Dash!!, in which both team members perform it when the Pre-race countdown is finished. There are sixteen courses to race on. Each cup features four tracks. Five different cup races are available, one of which is the All Cup Tour, featuring all sixteen tracks in random order (except for the first, Luigi Circuit, and the last, Rainbow Road). Each track is also playable in "Mirror Mode," where the tracks are mirrored; however, Mirror Mode is only available for 150cc.

This installment also features multiplayer battle modes. As in previous installments, the battle arenas are enclosed, with varying architecture and a constant arsenal. In addition to the balloon-popping game, which has been the standard Mario Kart battle game, two new battle systems are included. The first, called "Shine Thief", involves capturing a Shine Sprite and maintaining possession of it for a set time period. The second, called "Bob-omb Blast", uses only colored Bob-ombs, and utilizes a trade-off point system that requires the players to succeed in attacks, while also avoiding those directed at them. Both battle modes have returned in Mario Kart 8 Deluxe, while adding a few new features.

Aside from the many drivers available, numerous other Mario characters play minor roles in the game. Lakitu reprises his role as the referee, signaling the start of each race, alerting players when they complete a lap, warning them when they are going the wrong way, and returning drivers to the racetrack when they fall into dangerous areas. Shy Guys, Piranha Plants, Goombas, and Wigglers are also present in the game and serve as obstacles for the driver to avoid. Toadsworth drives the winners of a cup during the victory celebration. Piantas and Nokis from Super Mario Sunshine also cheer players on certain courses, such as Peach Beach and Daisy Cruiser, and form much of the crowd at victory ceremonies (held at Peach Beach). Classic Mario series characters, including Donkey Kong Jr., can be seen in the crowds around Waluigi Stadium.

This game was the first game to let you choose your own kart instead of using the default kart, this includes 21 karts to choose from. They are categorized by weight. Generally, lightweight karts have good acceleration and handling and are easily able to traverse rough terrain, but have low top speeds, can be knocked around by larger karts, and can only hold light characters. Heavyweight karts usually have high top speeds, can knock around many smaller karts, but they have poor acceleration, steering, off-road handling, and can only be manned if there is at least one heavy character. Middleweight karts' performance are well-balanced, but they cannot hold heavy characters. However, there are exceptions to this, such as the Barrel Train and Boo Pipes. Of 21 karts available in all, only eight are available from the start. The other 13 may be unlocked by successfully completing races and finishing the game. Although everyone has one kart, the twenty-first kart is the Parade Kart that Toadsworth uses to drive the first place winners. This kart the best stat ratio (4 stars for speed and weight; 3 stars for acceleration) and any combination of characters can drive it, but it takes the longest to recover from flipping over.

A notable attribute of Double Dash!! is that it allows LAN play using the GameCube broadband adapter. Up to eight GameCubes can be connected, allowing for 16 player multiplayer games (two players controlling each kart).

Mario Kart: Double Dash!! offers four modes, some of which players can participate in either by themselves or with a friend.

In this mode, players, by themselves, with a friend, or 2 teams, race against 6 or 7 CPU controlled vehicles in a race for 1st place across 4 tracks. There are three engine classes to choose from initially, with the fourth engine class, Mirror Mode, being unlocked after completing 150cc.

There are four cups in Grand Prix mode, with each track being harder than the last. The Mushroom Cup contains basic courses with a few hazards, whereas the Special Cup features expansive courses and a large number of gimmicks, which put the player's skills to the test.

Fourteen courses have 3 laps, except for Baby Park, which has 7 because of how short it is, and Wario Colosseum has 2 laps because of its expansive length in comparison to other courses.

The Special Cup is unlocked after finishing the 100cc Star Cup with a 1st-place win.

The fifth cup, known as the All-Cup Tour, has players racing on all 16 courses in the game. Luigi Circuit is the first course and Rainbow Road is the last course. The other fourteen tracks appear in random order. Unlike the four cups, the All-Cup Tour doesn't appear in the other racing modes.

In this mode, one player races across a course in the shortest time possible. Before playing this mode, the player is tasked with entering their initials. During a Time Trial, the player will only have two Mushrooms on hand for a speed boost.

The best lap time and race time are saved after finishing. The player can then race against their own ghost or the Staff Ghost on a specific track. If the player fails to place within the top 5, their race time will not be counted. Ghosts cost 5 blocks on the GameCube's Memory Card.

In Japan, players could submit special codes in Time Trial for a contest. While this never appeared overseas, the code itself can still be accessed in all versions. To see this code, the player must press L, R, L, R, X, Y, X, Y, Z after finishing a Time Trial. A 16-digit code will show up on the bottom of the screen.

Two to four players participate in a race around the track without any AI drivers. In LAN mode, 8 or 16 players can join.

The Option mode has these changes:

The defining feature of Mario Kart: Double Dash!!, where two players share one kart, controlling their respective characters. One player drives while the other throws items and uses moves that a player by themselves cannot use. The Slide Attack allows a team to steal items from their rivals while messing up their controls. In addition, if both players press the A button at the right time, their Rocket Start becomes the Double Dash, a much stronger variant.

Time Trial cannot be selected in this mode.

The following modes can/cannot be selected in co-op play.

Yoshi and Birdo.
Add a photo to this gallery 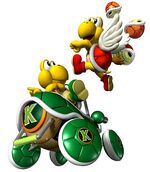 Toad and Toadette (Unlocked with Gold in Special Cup, 100cc).
Add a photo to this gallery 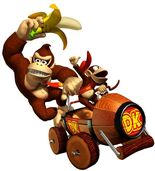 Petey Piranha and King Boo (Unlocked with Gold in Star Cup, Mirror).
Add a photo to this gallery

Every character has their own special item. Different combinations means a wide variety of items. For example, if someone were to play as Toadette, another player were to play as Baby Mario/Luigi and they controlled the kart together, they would be able to get Golden Mushrooms and the Chain Chomp occasionally.

Petey Piranha and King Boo can obtain any Special Item, except for the Green Fireball and Birdo's Egg due to both of them being the same items function-wise.

In Battle Mode, any character can get a Special Item, regardless of which character and kart combination is used.

Almost all cups in the game will unlock something new once the player completes it. Here is a list:

Retrieved from "https://mariokart.fandom.com/wiki/Mario_Kart:_Double_Dash!!?oldid=85215"
Community content is available under CC-BY-SA unless otherwise noted.