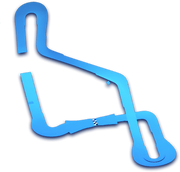 Mario Kart Stadium is the introductory track of Mario Kart 8. It is also the first track in the Mushroom Cup. It is a huge circuit with anti-gravity sections set in the middle of a huge arena. A giant statue of Mario in his Standard Kart is in the center of the stadium.

The staff ghost kart setup is Mario driving the Sports Coupe with Standard tires and the Super Glider.

The course begins with a short straightaway followed by a right turn. The track then turns right with three colored paths that stay together: an inner blue path, a yellow path in the center that says Mushroom Cup on it, and an outer red path with Boost Pads. The track then approaches the only anti-gravity part in the track followed by a left turn. Next, the course goes up and down a raised hairpin turn, followed by a gliding area, and one more left turn to the finish line.

A bird's-eye view of the track.

Bowser in the Badwagon racing with Luigi, Yoshi, Wario and Larry.

Mario at the starting line.

Mario and racers revving up their engines.

Performing a Mini-Turbo on the first turn.

Performing another Mini-Turbo on the yellow and blue turns.

About to enter Anti-gravity mode.

Performing another Mini-Turbo on the third turn. The Mario statue can be seen from here.

Drifting on another turn, with a incoming Red Shell that gets destroyed somehow.

Drifting around another turn.

About to approach a Glide Panel.

About to drift around the last turn, with some green Pipes on the dirt.

About to enter the second lap.