Mario Kart Wii, stylized as MARIOKART Wii and abbreviated as MKW and MKWii is a Mario kart-racing video game by Nintendo for the Wii console and the sixth game in the Mario Kart series, the fourth for a home console. The game was released on April 10, 2008 in Japan, April 11, 2008 in Europe, April 24, 2008 in Australia, April 27, 2008 in the US and April 30th, 2009 in South Korea. The game is packaged with the Wii Wheel accessory which is designed to house the Wii Remote to allow more intuitive and conventional steering. The game does support the Wii Classic Controller, Nunchuck, and the Nintendo GameCube controller as well. Mario Kart Wii is the second game in the series to support online multiplayer via the Nintendo Wi-Fi Connection (discontinued on May 20, 2014,). However, via a custom unofficial fan-made server known as "Wiimmfi", you can still play online as of January 2021. [1]

Nintendo, learning from their mistakes in Mario Kart DS, have greatly improved the online multiplayer offering in this game. Unlike past games, Mario Kart Wii supports 12 racers per race and all appear during any mode except Time Trial. The player can also turn off the CPUs when two or more players are present. Mario Kart 8 and Mario Kart 8 Deluxe also support 12 players.

Nintendo Wi-Fi Connection was terminated by Nintendo starting on May 20, 2014, making it no longer possible to play this game online without changing the settings of the Wii.

Mario Kart Wii was not released in China back in 2008/2009. However, at ChinaJoy exhibition on August 2, 2018, Nvidia revealed that Mario Kart Wii would be released on the Nvidia Shield. New features include the game running at 1080p and allowing for 12 player racing online. Finally, Nintendo will be opening the NFC in China.

Aerial tricks can be performed by shaking the Wii remote in a specific direction. Other controllers can activate tricks by usage of the d-pad. Upon landing, the character will receive a speed boost. The Spin Turn technique has also returned from Mario Kart 64.

In addition to the karts, Mario Kart Wii introduces bikes in the small, medium, and large groups. Bikes are harder to handle, but they can do wheelies, which gives you a small boost in speed and an advantage in courses without many sharp turns.

Originally from Mario Kart DS, online mode is back using Nintendo Wi-Fi Connection. Twelve players can race and battle simultaneously over the internet. This game also introduces the "VR" point system, a score that you have based on how many wins or losses you have playing online. One can install a channel on the Wii Menu called the "Mario Kart Channel." This channel allows the player to check rankings for Time Trials and Tournaments as well as race ghosts submitted by other racers through WiiConnect24. However, both WiiConnect24 and Nintendo Wi-Fi Connection were terminated on May 20, 2014 because Gamespy's servers were shutting down. It was later replaced by Nintendo Network. Now, the only way to use these features again is to change your Wii's primary DNS to Wimmfi's DNS, or download the Wiimmfi patcher.

There are 12 racers that are unlocked from the start, with 14 unlockable characters (including both Mii outfits), for a total of 26 playable characters.

Small characters have great handling but generally bad speed. Medium characters have average stats. Finally, large characters have top speeds but bad handling and acceleration. The result is a well balanced character offering that leaves each character/kart combination with benefits and drawbacks.

Miis are unlockable once the Special Cup on 100cc are beaten (Outfit A only). Their weight varies depending on their height and weight. A second outfit (Outfit B) is unlockable once all Expert Staff Ghosts are unlocked. The sizes of Miis can be adjusted in the Mii Channel, which is pre-downloaded on all Wiis. The taller or broader he or she is, the larger the kart or bike he or she can play with.

Every character in Mario Kart Wii has one or more hidden statistic boost(s).

Here is a list of every character's statistic boost(s):

In Mario Kart Wii, there are 2 distinct types of drifting: inside (or inward) drifting and outside (or outward) drifting. This greatly affects how the vehicle will handle turns. If a vehicle is outside drifting, then its drift behaves in the usual way, that is upon activating the drift, the vehicle initially swings outwards before curving inwards in a circular path. However, inside drifting (which is exclusive to some bikes) behaves rather differently, as when the drift is activated, the bike immediately begins turning inwards, without first swinging outwards. As a result of this, inside drifting bikes can take turns much more tightly, and it is possible to delay the activation of the drift until the last possible moment, enabling the player to take full advantage of the wheelie mechanic. This property is independent of the drift stat, however, and inside drifting bikes with low drift stats such as the Spear will still struggle to turn sharp corners. The following bikes are inside drifting:

There are two ways to play Battle (Balloon Battle and Coin Runners), and there are 10 stages to battle on. 5 are new stages, and the other 5 are retro stages.

In addition to these, Galaxy Colosseum was exclusive to Nintendo tournaments. Using a modified Wii with the Gecko cheat engine, the course can be enabled in racing mode, replacing Mushroom Gorge.

Mario Kart Wii has obstacles in almost every course which are:

Mario Kart Wii is known for its many glitches. Here is a list of all the tracks with glitches, and an explanation with them:

A minor glitch: Also, if you use a Mushroom to get to get to the second mushroom (it should be the one by the bridge at the beginning.) , you can crash through the taller green mushroom's stem beside the second red one.

Mario Kart Wii is the most competitive in the series. With its complex glitches, unique drifting styles, and unbalanced vehicle roster, it is definitely the top contender. Time Trial records are as active as ever, with new records being set nearly every day. On January 12th, 2021, Arthur set the first ever humanly set Rainbow Road ultra shortcut. It is the first time this record has been done by a real person and not using tools. Logan was the second and only other person to pull this off. 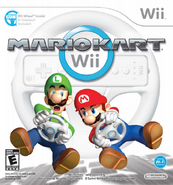 The character select screen with all characters unlocked.

The original ending with Mario and Peach at Mario Circuit.

The true ending with all 24 characters in Luigi Circuit.