A large yellowish-orange mushroom with red spores that enlarges the user and allows them to flatten any racer in their path.

The Mega Mushroom (メガキノコ) (known as the Giant Mushroom in Mario Kart Arcade GP) is a super-sized mushroom that Mario or Luigi can eat to grow super-sized themselves. First appearing in Mario Party 4, it grants the user destructive strength over anything in their path for a limited amount of time.

The Mega Mushroom made its first appearance in Mario Kart Arcade GP and its sequel under the name Giant Mushroom. Here, it enlalrges the player's kart for a limited time. However, this makes them an easier target to hit.

The Mega Mushroom makes its first, and currently console appearance in Mario Kart Wii. Players can get this item when they are in 4th to 8th place, as well as 9th place in the VS mode. When the player uses this item, their character grows bigger and their voice is deepened. In addition to enlarging the character, the Mega Mushroom allows the user to run over the other racers and flattening them for a limited time.

The Mega Mushroom also increases the user's speed and they don't lose any when on off-road terrain, as well making the user invincible to everything except the Super Stars, Bullet Bills, and the Blooper. When struck by lightning, Mega Mushroom users return to regular size instead of being shrunk completely.

The Mega Mushroom reappears in Mario Kart Tour with the same function as it appeared in said game. This time around, Mega Mushroom users do not get any speed or off-road benefits, and they will revert back to their normal size should they get hit by another racer's item. The music also does not change while the item is used.

After eating a Mega Mushroom, your character will enlarge by two or three times (and the catchy Super Mushroom music will play from New Super Mario Bros.). At this size, most small arms Items (such as Red Shells or Bob-ombs) or course obstacles (like the vehicles on Moonview Highway or Moo Moos on Moo Moo Meadows) will have no affect on you. In fact, even if Lightning or a Thunder Cloud strikes, your racer will only shrink down to normal size! Bullet Bills, Starmans, and falling off the edge are the only weaknesses of the Mega Mushroom.

Probably the best attribute of the Mega Mushroom is the ability to flatten any racers that you catch up to. Instead of just knocking them over with a Star, the Giant Shroom will drive right over enemy racers, crushing them down like a Thwomp or a dinosaur from Dino Dino Jungle. Although the effect isn't as long as Thwomps or the dinosaur, it still tremendously stops their acceleration and caps their top speed for a while.

If no enemy Items or opponents are in sight, the Giant Mushroom still comes in handy because it grants a massive amount of speed (about equal to a Star), and off-road sections of the course can be traversed without slowing down. Just be careful when taking shortcuts, as it can be difficult to know when the huge-effect will wear off... you could find yourself stuck in the middle of nowhere.

There's a few options to defend against being smushed by a Mega Mushroom. One is to be either armed with a Star or a Bullet Bill, and since those are usually not available in the upper places (the ones most likely to be victims), your best bet is to either steer well clear of them or hope your vehicle is able to dodge out of the way.

A trophy of Mario with an early, green version of the Mega Mushroom (Mario Party 4). 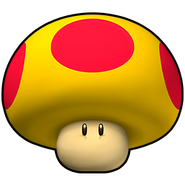 Item icon from Mario Kart Wii.
Add a photo to this gallery
Retrieved from "https://mariokart.fandom.com/wiki/Mega_Mushroom?oldid=84034"
Community content is available under CC-BY-SA unless otherwise noted.