Metal Mario is the same size as regular Mario, but there is a huge difference in appearance- Metal Mario is made out of shiny, heavy metal. All his features, including his shoes, overalls, mustache, and hat can still be made out, but they all share the same silvery color. The only part of him that is not metal is the emblem on his hat, which is a black M (his initial) over a white circle. As you can imagine, Metal Mario has trouble swimming. Good thing you don't have to swim in Mario Kart.

Metal Mario appears in Mario Kart 7 as an unlockable character after the 150cc Special Cup is cleared. He is a middleweight, but he has the greatest speed advantage in the game, making him ideal for Time Trials and more competitive players that can deal with getting pushed around by heavyweights. His logo is a shiny and grayish version of Mario's trademark "M".

Metal Mario reappears as an unlockable character in Mario Kart 8, again as a heavyweight. Again, he gives a great boost to pure speed, but his high weight slows down his acceleration.

Metal Mario is now a default character, but his variant, Gold Mario (a newcomer to the series), is the only unlockable character in the game.

Metal Mario with some tires.

Metal Mario as he appears in Mario Kart 7

His icon on Mario Kart 8. 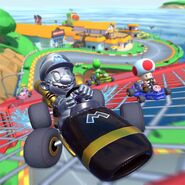 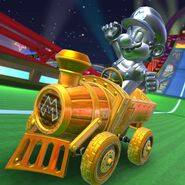 Add a photo to this gallery
Retrieved from "https://mariokart.fandom.com/wiki/Metal_Mario?oldid=75214"
Community content is available under CC-BY-SA unless otherwise noted.